OUR VINEYARDS CONTINUE TO BLOOM

Flowering is one of the most important and delicate stages in the vine’s growth cycle. It’s the time in which the embryonic flowers start to emerge: small, white flowers that are pollinated by the wind and by the actions of insects, before giving way to the first grape clusters.

The flowering process will also determine how many grapes will form part of each cluster, and therefore how many clusters the vine will produce and what the vineyard’s overall yield will be. Flowering is key to judging the quantity, and also (to a certain extent) the quality, of the next harvest.

When the vines start budding, tiny bunch-like formations appear alongside the vine leaves. As the cycle progresses, these “micro-bunches” are joined by little ball-shaped protuberances which people often mistake for small grapes. The micro-bunches are called “inflorescences”, or flower clusters, while the ball-shapes are called “flower buds”. The flower buds go on to develop into small flowers, with both male and female parts: following their fertilization, the grapes then begin to grow, in a process known as “fruit setting”. 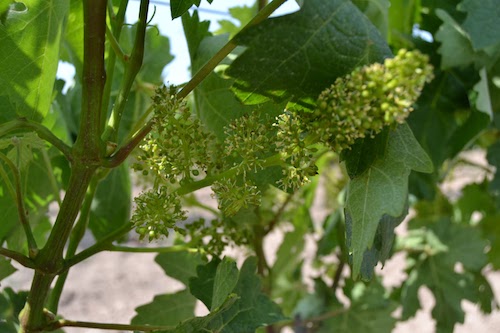 Our vineyards are located at altitudes of between 420 and 770 metres. At different altitudes, vines react very differently to rain and temperature changes, which is why we have divided our vineyards into three general zones: the sierra, or mountain zone; the comarca, or lowland zone; and the ribera, or riverside zone.

Because of the harsh winter and cool, rainy spring we’ve experienced this year, the flowering process was delayed by between two and three weeks, in comparison to the average start-date in previous years.

Consequently, we’re keeping a very close eye on how the flowering process develops and performing regular checks in order to make sure the process reaches a successful conclusion and that the fruit setting occurs as desired.

You can find out more about which cookies we are using or switch them off in settings.

This website uses cookies so that we can provide you with the best user experience possible. Cookie information is stored in your browser and performs functions such as recognising you when you return to our website and helping our team to understand which sections of the website you find most interesting and useful.

Strictly Necessary Cookie should be enabled at all times so that we can save your preferences for cookie settings.

If you disable this cookie, we will not be able to save your preferences. This means that every time you visit this website you will need to enable or disable cookies again.

This website uses Google Analytics to collect anonymous information such as the number of visitors to the site, and the most popular pages.

Please enable Strictly Necessary Cookies first so that we can save your preferences!

Please enable Strictly Necessary Cookies first so that we can save your preferences!